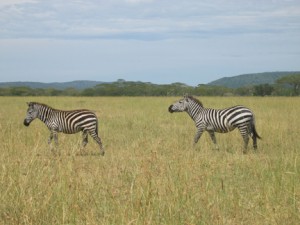 TANZANIA is home to more than 100 different ethnic groups. The country also has some of the largest wildlife herds on the African continent. Large and diverse, the country boasts some of the most spectacular topography in Africa, including the Great Rift Valley, Mt. Kilimanjaro, the vast Serengeti Plains and Ngorongoro Crater. The coastline, beaches and islands are beautiful, and Zanzibar is a highlight, especially exotic old Stone Town.

SERENGETI NATIONAL PARK is the most famous wildlife park in Tanzania and is contiguous with the Masai Mara National Reserve in neighboring Kenya. There are literally millions of hoofed animals on the endless plains of the Serengeti. The wildebeest is the chief herbivore of the Serengeti and also the main prey of large carnivores such as lions and hyenas. The wildebeest are well known for their 1000km annual migration to Masaai Mara early in the dry season, July to August, and then returning to Serengeti around October—this is all depends on the rains and is definitely not a set schedule.

NGORONGORO CONSERVATION AREA features incredible views from the rim of a volcanic crater. In addition, just about every species of wildlife in East Africa is in the 11-mile wide x 12-mile long Ngorongoro Crater. The wildlife viewing here is superb and a must for every traveler to Tanzania. There are said to be more than 20,000 animals, including black rhinos, in the crater. Ngorongoro is a favored spot for wildlife because there is permanent water and pasture on the floor of the crater. 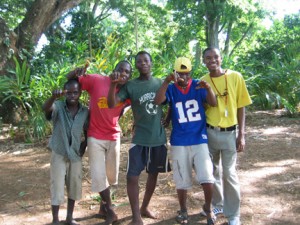 OLDUVAI GORGE— In 1959 Mary Leakey discovered fossil fragments of the skull of one of the possible ancestors of Homo sapiens. In 1979 she made another major discovery, in the form of footprints, at Laetoli. Since they were made by creatures that walked upright, this pushed the origins of the human race much further back than had previously been supposed. Olduvai Gorge is the perfect halfway mark if you are traveling between Serengeti and Ngorongoro.

LAKE MANYARA NATIONAL PARK — A perfect first stop for a short visit, especially if you are continuing on to Ngorongoro and Serengeti. Lake Manyara National Park is 330 sq km in size.

RUAHA NATIONAL PARK — The Park covers an area of 12,950 sq kilometers and forms the core of a much larger ecosystem of 45,000 sq kms. The park is only marginally smaller than the Serengeti and could be characterized as ‘pristine and untouched’ Africa, and is bordered in the north by the Kizigio and Rungwa River Game Reserves.

TARANGIRE NATIONAL PARK — About 120 kilometres (75 miles) south of Arusha on the Dodoma Road, Tarangire rivals the Serengeti for the size of the herds that congregate from June to November, when many of the animals mass along the Tarangire River.

MOUNT KILIMANJARO — Known affectionately as ‘Kili’, Mount Kilimanjaro is the highest ‘stand-alone’ mountain in the world and is a breathtakingly impressive sight that can, on a clear day, be seen from 320 kilometers (198 miles) away. It rises from an average altitude of 1,000m/3,281ft on the plain to 5,895m/19,341ft – a climber’s dream peak.

MAHALE MOUNTAINS — The Mahala Mountains National Park is about 120 kms (75 mls) south of Kigoma on a peninsula that juts out into Lake Tanganyika. The park covers an area of 1,613 sq kms (623 sq mi), and the western boundary protects not only 63 kilometers (39 miles) of lakeshore, but also the adjacent 1.6 kilometer-wide strip of coastal waters. 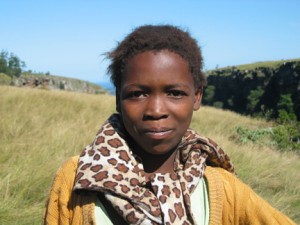 ARUSHA — For most travelers, Arusha is the gateway to the Serengeti, Lake Manyara and Tarangire National Parks, as well as the Ngorongoro Conservation area. Arusha is a small town nestled in the shadow of Mount Meru, with commanding views of the mighty Kilimanjaro. The neighboring Arusha National Park lies within the Ngurdoto Crater, a volcano that has been extinct for a quarter million year. Covering 137 square kilometers, the terrain is similar to that of Mount Kilimanjaro.

ZANZIBAR ISLAND — Often referred to as the Spice Island, Zanzibar is one of the world’s largest producers of cloves. Many centuries of occupation and influence by various peoples have left their mark, and the old Stone Town of Zanzibar is one of the most fascinating places on the east coast. Stone Town is made up of a labyrinth of narrow, winding streets lined with quaint little shops, bazaars, mosques and restaurants. Do visit the House of Wonder, the Arab Fort and the Palace Museum. The bustling fruit and vegetable market is an experience not to be missed! Zanzibar offers excellent scuba diving and snorkeling on the numerous beautiful coral reefs off the main islands and its many offshore islets. A spice tour can be a highlight, as can a visit to the Jozani Forest. The forest is a nature reserve about 35km outside of Stone Town and offers excellent views of the red colobus monkey.

The Masaai are said to be the first inhabitants of the Tanzanian interior; they migrated from Kenya down the Rift Valley. European explorers, the most famous being Stanley and Livingstone, began arriving in the mid-19th century. The German occupation continued until the end of WWI, after which the League of Nations mandated the territory to the British. Nationalist organizations developed after WWII, and finally Tanganyika gained independence in 1961. An impressive 38 percent of Tanzania is allocated as national or marine parks or reserves.

The coastal area had long been the scene of maritime rivalry, first between the Portuguese and Arab traders and later between the various European powers.Zanzibar, which for decades had been ruled from Oman, became so important as a slaving and spice center that Omani sultan Seyyid Said moved his capital there from Muscat in 1832. The island of Zanzibar had been a British protectorate since 1890, and it remained that way until Zanzibar and Kenya gained independence in 1963. Shortly after independence, President Julius Nyere forged a union with Zanzibar and mainland Tanganyika to form Tanzania.

GEOGRAPHY & CLIMATE — Tanzania covers a huge area of 943,000 sq km, and is a land of plains, lakes and mountains with a narrow low-lying coastal belt. The bulk of the country is a highland plateau, some semi desert and the rest savannah and scattered bush. Kilimanjaro is a staggering 5,892 meters high. The long rainy season is from around mid March to mid May. A shorter rainy season is during November and December and into January. Tanzania’s widely varying geography accounts for its differing climatic conditions. In Tanzania each season has its own distinct advantages, and each area has its best moments. The annual wildebeest migrationis an incredible event only witnessed in East Africa.

The equator, the geography, the time of year and the Indian Ocean trade winds are all factors that influence the weather in Kenya and Tanzania and should be taken into account if you are planning any type of African safari travel.

Hot Days and Cooler Evenings on Safari – As a general rule of thumb, on safari you should expect hot days and cooler evenings. No matter what time of year you are traveling, we always recommend that you travel with at least a warm sweater and a light rain jacket.

Tropical Weather on the Coast – Traveling to Zanzibar and Kenya coastal areas you can expect the weather to be humid and tropical with occasional light breezes.

December to March – This is summer in East Africa and temperatures are warm. The short rains from early November to late March are sporadic and don’t last long. Game viewing in the Serengeti and diving in Zanzibar are excellent now.

April to June – The long rains are from early April through early June-but don’t be put off: safaris are still good in the Serengeti, Lake Manyara and the Masai Mara. It is also less expensive and less crowded for travelers during this season, which makes it one of the best times to go.

July to November – This season offers comfortable temperatures and is a popular time for travel because of summer holidays in the Northern Hemisphere. It can get very busy, so do be sure to book well in advance. If you want to climb Kilimanjaro, now is the time to do it.

POPULATION — Tanzania has a population of approximately 36 million and is home to about 120 tribal groups, of which about 95 percent are of Bantu origin. The Arab influence on the islands of Zanzibar and Pemba is evident in the people, who are a mix of Arabs, Shirazis, Comorians, and Bantu.

LANGUAGE — Swahili and English are the official languages, but many local African languages are also spoken.

CURRENCY — The unit of currency is the Tanzanian shilling.